Last week, finally I and my boyfriend went to Seaworld Jakarta. Yeay~! :D

To be honest, I was pretty excited and really had a high expectations of this place despite the warning from my brother, because he said it was not that good. But, let’s give it a try!

We went to Ancol by Transjakarta (go go public transportation! ;) ).
We met at Dukuh Atas bus stop and took the bus to Matraman, and continue to Ancol. Thank God the Transjakarta were not so crowded, but still..it felt like an exhausting and long journey since the weather was so damn hot!

After arrived at Ancol, we planned to get to Seaworld by Ancol’s shuttle bus that arrived every 10 minutes. I just knew that there’s such thing! Nice isn’t it? :)

Actually it is, if only the bus is well air-conditioned and sufficient to carry all the passengers. At that time, I need to wait around 20 minutes to get a space-to-stand. What’s make it worse is that in the middle of the way, there were some anak kampung came to the bus, smelled bad and brought filthy underwear in their hand. And big lizard, alive. Iyuhhuhuhu T___T

After such a horrifying ride, we arrived at Seaworld. Fyuhhh~

Inside Seaworld there were several section: the main lobby, the tunnel, the second floor and the preservation area.

At the main lobby, there are some aquariums that contain anemon, clown fish, and other small fish. There are also an open pool and big aquarium for hammer sharks and dugong/manatee/sea cow.

Actually, I was pretty excited to see the hammer sharks because the advertisement of this newly coming creature is so wow. But then, I feel disappointed because I cannot see it clearly since the aquarium is quite dirty. And, the shark is not big as I imagine, though. :))
Same with the hammer shark, I also disappointed with dugong’s aquarium. For this one, I even could not able to see the creature.

In the open pool, there are starfish, turtle and mini shark.
I didn’t try it becauseee…I don’t know, I just don’t feel it’s right.
I mean.., the pool is so small and shallow, surrounded by lots of people that try to dip their hand into the water, touch the turtle and shark, even lift it although the board already said not to. I just wonder how stressed is the turtle and shark and how long that they will survive. >_<

In this tunnel, we can see stingrays, sharks and other fish swimming above us. Interesting! :D
Actually, the tunnel was not as I imagined. I wish they are not that small and short-length. At that time the visitors were so many, so we cannot spend much time in the tunnel because we were being pushed to go forward from behind.

In the second floor, there is a small library. Good place to relax with the children and straighten your legs. :D
Besides that, from second floor we can see a big pool from above. This is the pool that we see from the tunnel. The pool is not so big, yet so dense. :(

This area is like fossil museum, sort of. There are displays of preserved fish, mostly the fish from deep sea. There is also a display of giant stingray that have died some time ago because of illnesses. This stingray is big, huge! The length is 2 meters, exclude the tail. 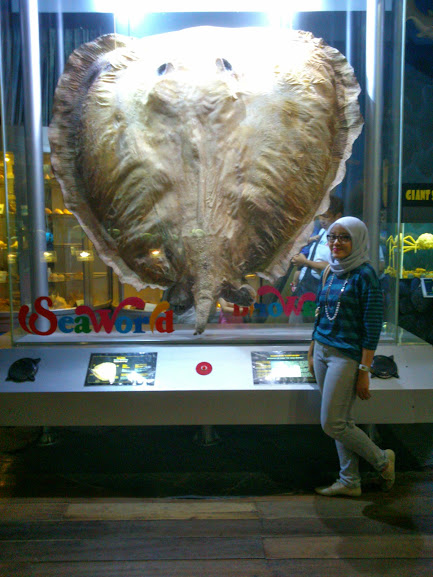 I think this place suits best for children, school group outing, and family. Good place to learn about marine life. Besides the aquarium, there is also a mini cinema inside the Seaworld. We can also see the feeding in certain time.

Compared to the ticket price (100,000 IDR; thank God that there were a voucher promo from Groupon so we only need to pay half), I think this is not worth the price. Maybe because I’ve seen a better one *cough*Ocean Park HK*cough*.

Since the public interest to this place is still high, I think they should renovate and make it better, larger aquarium, put more variety of fish, and clean the aquarium. I’m not sure if it’s the water or the glass, but it is surely not clear. I dreamed of a clear blue water, so next time I go there, I could take many good photos. :))

find her on social media