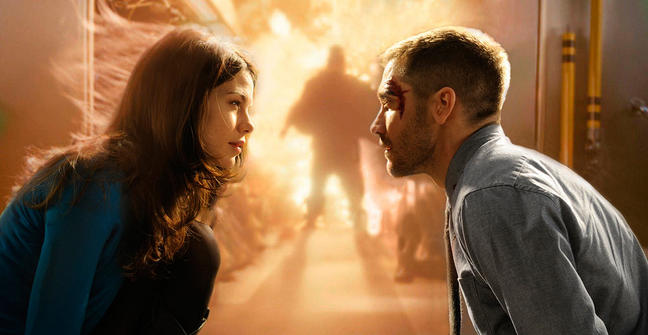 Source Code was released on April 1st, 2011 in Europe and America. But, this movie has just aired few days ago, here. It’s all due to problem and regulation in Indonesia’s cinema that makes all Hollywood movies come late and some will not aired. :'(

OOPS! Spoiler alert! People who haven’t watch this movie may not want to read the rest of the article below. :)

Colter Stevens (Jake Gyllenhaal) is an army helicopter pilot who finds himself awake in a body of unknown man. Later, he knows that he is part of a mission to find Chicago train bomber. He’s being an experiment on a program called Source Code. Source Code is a program that allow a person to take over someone’s body in his/her last 8 minutes of life. It’s not a visit into past time, but go to an alternative reality.

Colter is placed in the closed chamber and Capt. Goodwin (Vera Farmiga) will explain the mission through screen and microphone. His mission is to gather information to prevent future bomb attack by locate bombs in the train, discover who builds them, and report the informations to Capt. Goodwin.

Every time he awakes in a train, Colter awakes in body of Sean Fentress, history teacher who ride the train with his friend, Christina (Michele Monaghan). He is sent back several times because the mission haven’t completed yet. Every time he is sent back, he can learn from the previous travel and perform different action.

This movie is kinda confusing. All you have to do is just pay fully attention to it to understand. There is a lot repetitive scenes, but they’re packaged well so the audiences are not boring. The ending makes audiences think, whether the present be changed or the day in the alternate world be saved.

After Colter discover everything about himself, he request to sent back once again in order to safe Christina and all the train passangers. After 8 minutes live in the alternate world, he is still there; not died, not sent back. In other scene, his text message in the alternate world to Capt. Goodwin arrived before any accident happen.

Every time he sent to the train, he got 8 minutes to accomplished the mission. (Why the director choose 8 minutes? Why not choosing 10 or 15 minutes?) Sometimes, the 8 minutes passed very fast. But, like the last-eight-minutes-travel, the 8 minutes is very very long. How can he do all that stuffs in 8 minutes? Have quick conversation with some of the passangers, deactivate the bomb, catch the bombmaker, send message, kiss Christina? Hahaha, that’s seems impossible.

What would you do if you only had eight minutes to live?

So, is there any alternate-parallel-world in this real life?

Imagining…, what am I doing there right now? What I’ve become?

find her on social media